Immediately after the recess bell sounds Mrs. Lindsey’s second grade class excitedly makes their way back into the classroom. They greet her with smiling faces as she announces our presence and explains what is about to happen. Cara, our NatureHoods Coordinator, and myself say our hellos as they make their way towards us curiously responding “Hello,” and “Hi! Nice to meet you” and “Hello and welcome to our classroom.” They have no idea what a treat they were in for, neither do I. 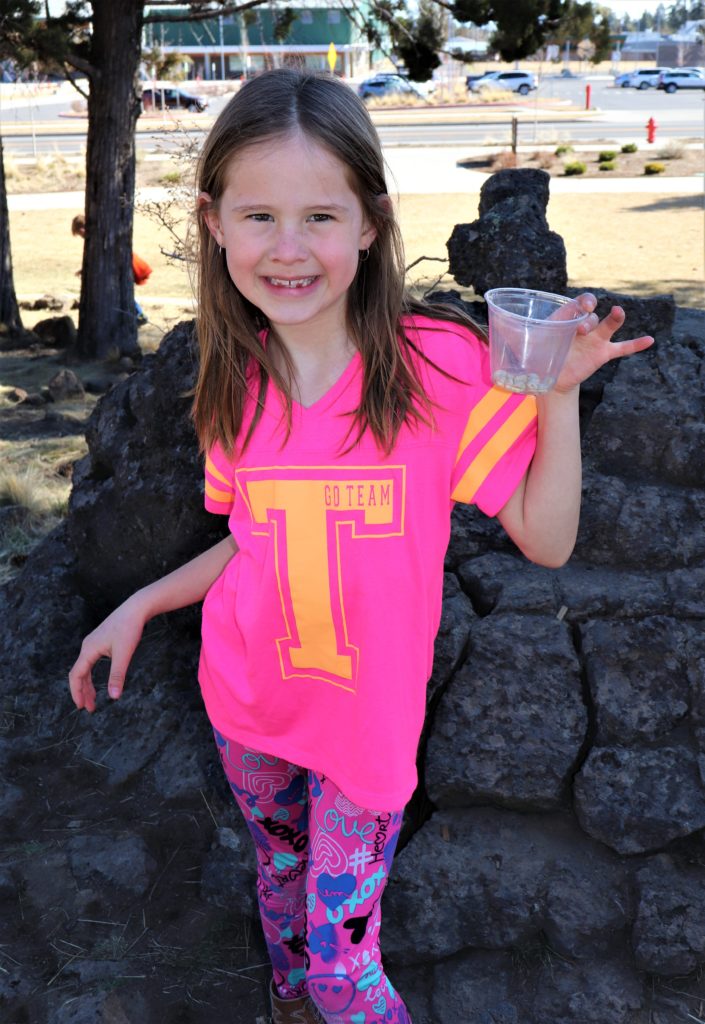 My role was to observe one of Cara’s programs and to capture it in photos. As the newest member of the Children’s Forest team, joining her in the field meant gaining a better sense of our organization’s programming. This new lesson I was observing, “How do Animals Survive in the Winter?” had the students engaged from the beginning. Was it the photos of black bears that tugged at their heart strings? Was it the mind-blowing facts about adaptations such as a heart rate slowing down to 3-4 beats per minute? It was definitely a combination!

This winter Cara created and implemented two new lessons incorporating math into outdoor and nature-based lessons called Numbers in Nature. One on animals surviving in winter and “Tracks in the Snow” where students learn how to identify a variety of local animal tracks. Both target 2nd grade objectives and standards. Numbers in Nature was taught in 27 different classes reaching about 540 students in Bend and Redmond schools. 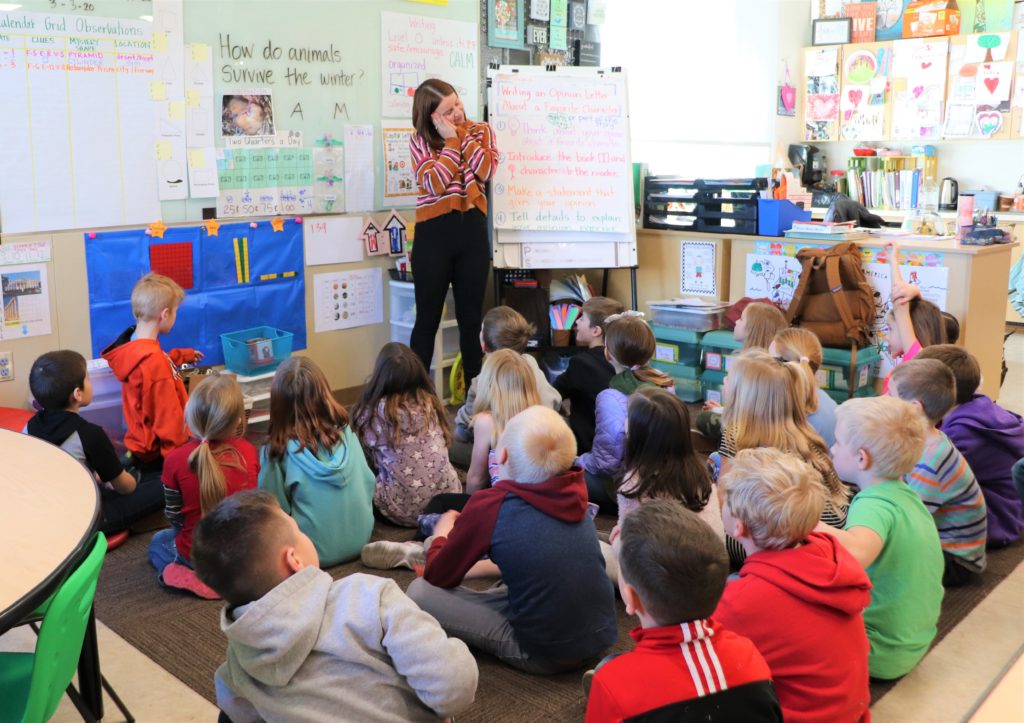 Instruction begins with “How do animals survive the winter?” as hands fly up ready to solve the mystery clue H.A.M. written on the board. I begin snapping photos as she calls upon them one by one for answers leading to solving the mystery – Hibernate, Adaptations, and Move. Eventually the lesson weaves its way focusing on hibernation, the bulk of the discussion, before moving outside for an exciting game where the numbers piece comes into play.

As we make our way to the park across the street, I collect students at the back of the line quickly making friends. We exchanged answers to silly, but important, questions in true curious 2nd grade fashion. One student in particular has become incredibly interested in befriending me. I jump into educator mode, though my role is observing, and continue our small talk. We pause once at the park as Cara is ready to go over the game’s instructions before counting, I mean playing. 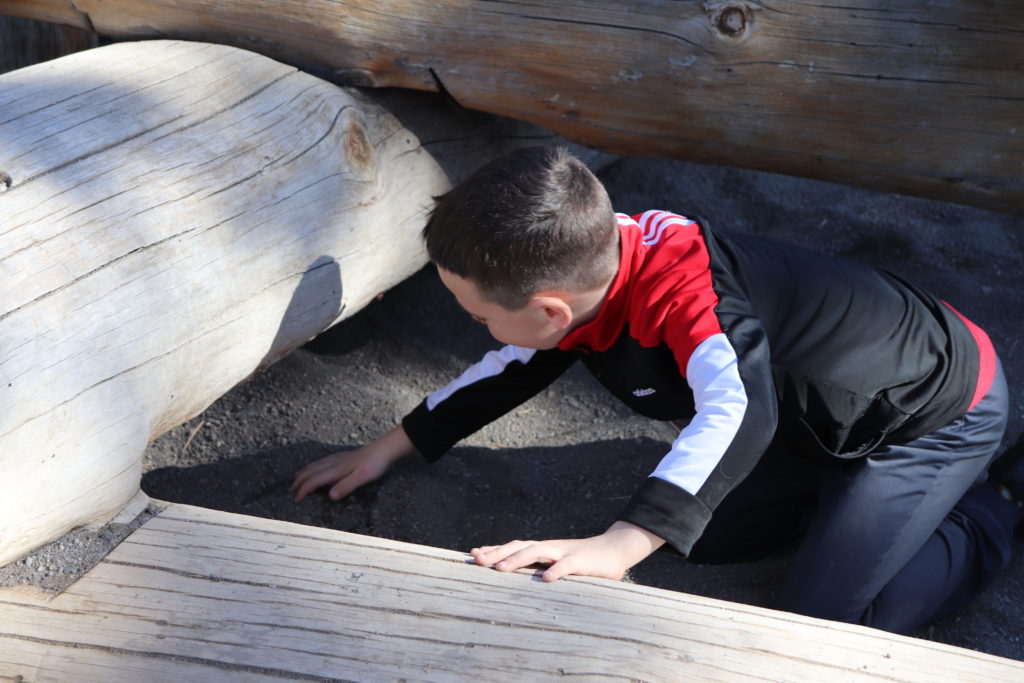 Of course everyone is pumped to start playing once boundaries are set and 2 predators are chosen. Round 1 begins! Predators close their eyes until it’s time to hunt, meanwhile everyone else takes their nest (a small cup)  finding the best spot to camouflage it. Once hidden, the food collection starts. The prey make trip by trip carrying only a seed at a time and placing it in their nest. The predators are eventually released; they begin hunting for nests for their survival. Round 1 ends, everyone circles back up around Cara, and she leads them in a discussion wrapping up what had happened.

Reconnecting and the Moment of Representation

As Round 2 commences I continue taking photos when I find the friend I made on our walk over. He tells me about his nest and how many seeds he has collected thus far. While we avoid catching the attention of the predators he quickly asks “Hey, are you Mexican?” to which I respond with a huge smile, “Yes, yes I am.” As he runs over to grab another seed he turns back to face me and smiles. It was the biggest smile I had seen all day. 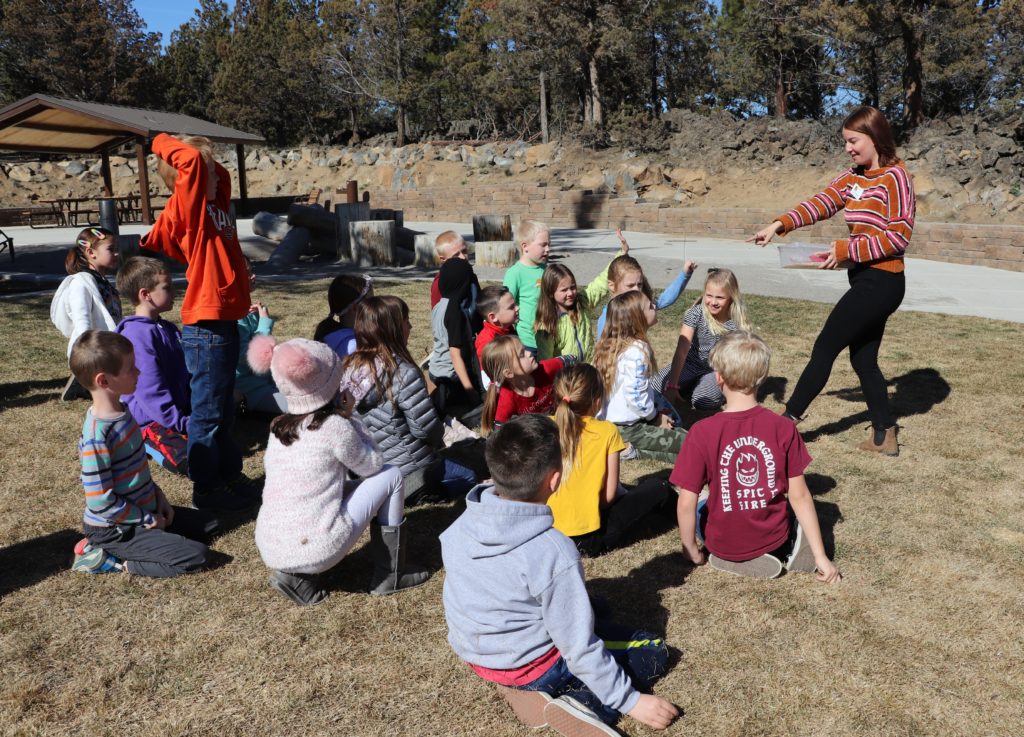 A few more exciting rounds followed by a conversation wrap-up before our time with Mrs. Lindsey’s class ends. We all say our goodbyes at the park before they trek back to their classroom. Everyone is smiling ear to ear and not just the students.

Representation and Why It Matters

I was thrilled with what I had just witnessed as I made my way to the office. To be honest, it took some reflecting on the day to realize what had happened with the student I had befriended. We had a personal connection that stood out to him. We could relate on a personal level that included our ethnic and cultural identities. Our identities were similar and we had something in common. We didn’t have to say much more than what was said in that moment to understand one another. It was a powerful experience, not only for him as a young student, but for me as well. This connection is just one of many examples illustrating the importance of communities and organizations working towards shifting representation in the outdoors – so more students like my friend can find role models, and inspire connections with programs and their leaders.

There are no upcoming events at this time.

Donate to the Children's Forest of Central Oregon today to connect children and families to the wonder, science, and adventure of nature.   Donate Today